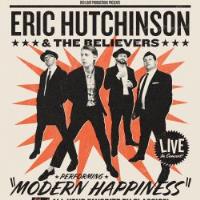 Modern  Happiness,  Eric  Hutchinson’s  fifth  studio  album,  is  his  finest  effort  yet.  The  album’s  10  tracks,  and  an  11th  bonus  track,  display  a  dramatic  departure  from  a  master  songwriter’s  usual  musical  forms  and  lyrical  themes,  while  also  expanding  on  his  refined  working  palette  through  the  many  disparate  genres  that  has  made  his  music  some  of  the  most  engaging  of  his  generation.  And  while  Hutchinson’s  soul,  pop  and  rock  composing  has  matured  exponentially  with  each  previous  release,  there  is  a  penetratingly  earthy  and  at  times  unflinchingly  raw  confessional  aspect  to  each  song’s  subject  matter,  which  translates  with  striking  clarity  to  his  vocals.