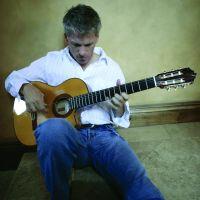 International , Award winning guitarist Todd Haaby and his group Sola Via live at the Tower Theatre this March for one of their few Oregon performances ....

Born in Northern California, Todd Haaby's musical influences came at a young age from his mother who taught him and six other siblings the basics of music and music theory.  At the age of 15, Todd received a guitar for a birthday present, not knowing that it would be a truly life-changing event.

Within six months, after hours of practice, Todd had formed his first band as the lead guitarist. Over the next three years, he delved into many opportunities such as live concerts, club performances, and even radio circulation of his work.   When Todd was 18, he was asked to perform with the prestigious Grammy Award-winning artist Phil Driscoll. When he was 24, Todd was introduced to the sounds of Spain, which proved to be a truly momentous occasion in his musical path.

Attracted by the fiery passion of Latin music, this would mark a turning point in Todd's musical direction. With a growing love of Spanish music and the fortunate opportunity to travel abroad, Todd developed a unique style all his own.

From the riffs he learned as a kid listening to Edward Van Halen, to the explosive sounds of the Gypsy Kings, Todd has combined all of his musical experiences to write and define a flavor of music indicative of Nuevo Flamenco.