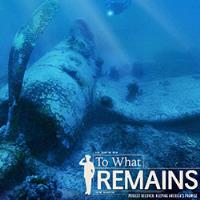 Project Recover, a small team of accomplished scientists, historians, and military veterans, scour
the depths of the ocean and the farthest corners of the earth, to search for and recover the
remains of the more than 80,000 Americans missing in action since World War II, delivering
closure, solace, and kinship to MIA families who’ve gone generations without answers.

To What Remains is the story of Project Recover, a small team of accomplished scientists,
oceanographers, archaeologists, historians, researchers and military veterans, who have
dedicated their lives to scouring the depths of the ocean and the farthest corners of the earth,
to search for, recover, and repatriate the remains of the more than 80,000 Americans missing in
action since WWII.

In what one MIA family member aptly described as like “looking for the smallest needle in the
largest haystack,” Project Recover team members comb through military action reports to
identify broad swaths of ocean and land where U.S. servicemen were killed over 75 years ago,
and execute onsite searches involving a combination of technology (sophisticated underwater
drones) and painstaking manual labor (scuba dives and archaeological digs). The team travels
to some of the most beautiful tropical locations in the world, where unimaginable atrocities once
occurred.

While the search for a single crash site can require years of effort, the Project Recover team
members are fueled by the sense of purpose that comes from identifying the remains of
Americans who gave their lives in service, returning those remains to their proper home, and
bringing closure to families who had nothing more than a picture on a mantle, vague memories
passed down from prior generations, and unanswered questions.

In breathtaking imagery filmed over several years and intimate interviews with Project Recover
team members and MIA families, To What Remains takes viewers inside this emotional journey
to honor our fallen servicemen, from the discovery of wreckage on the seafloor in the South
Pacific, to the living room of a stunned family in middle America, to a well-deserved final resting
place at home.

Q&A to follow with Derek Abbey and Pat Scannon