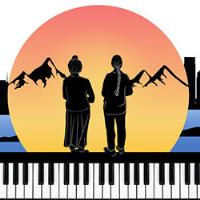 Freedom Off the Page is a two woman show based on the lives of writer performers Ann Boyd and Kim O’Kelley-Leigh. It is a poetic and often humorous look at the challenges, choices and incredible opportunities in all that life offers. The play interweaves Ann & Kim's lives, both current and past, with movement, stories, sound design, scenes and direct address to the audience. Together with director, Michelle Mejaski, and original music by Kyla Leigh, they explore loss, creativity, choices, empowerment and the transformative power of connection and friendship.

A note from the Director -

It has been my absolute privilege to not only direct Freedom off the Page, but to know these two astounding women and truly beautiful souls.  Their journeys are ones of both joy and sadness, of laughter and tears. These amazing woman encapsulate what it is to be human.  We see ourselves in them. I see myself in them. I too packed up my life and moved to Bend with my husband and only the unknown. My first jobs were working in retail, then as a barista, until I stepped out of any comfort zone I had known and started my own business, and there finding, friends, family, and community.  At age 29, I was diagnosed with cervical and uterine cancer.  Four years after that, at age 33, I was diagnosed with thyroid cancer.  Then the discovery of an AVM cluster and aneurysms in my brain.  More yearly checkups, MRIs, angiograms and again, a choice: sadness and anger or gratitude and triumph.  I chose to see life through a renewed lens, PTG.  When a trauma causes you to become stronger it is called Post-Traumatic Growth. PTG happens in approximately 10% of people who experience traumas and includes a deepened spiritual life, a new appreciation for being alive, visions for all possibilities that lay ahead, and a truly positive change.
Spending this time with Ann and Kim has inspired me not only as a director, but also as a woman and a human being.  They have helped me to grow as an artist, an individual, and a Spiritualist. Though sharing our stories, we have become so much more than colleagues, we have become family. I invite you to not only listen to their stories, but to open yourself to them.  Through Freedom off the Page, you not only see and feel the lives of these resilient women, you also see yourself.

Ann Boyd (Writer & Performer) - Ann has worked in the Chicago dance and theatre community since 1988 before moving to Bend in 2015. She began as a dancer with Mordine and Company Dance Theatre and went on to develop her own work as a choreographer, writer and director. Ann’s directorial work is recognized for its highly visual and physical approach to storytelling. She has worked with companies including Steppenwolf Theatre, Court Theatre, Lifeline Theatre, Rivendell, Powertap Productions and was an artistic director of two physical theatre companies Running With Scissors and Yellowhouse. Ann also created street spectacle theatre with Redmoon Theatre, and with Columbia College Chicago where she was on faculty and coordinated movement and devising for the theatre department. Before leaving Chicago, Ann’s partner Kurt directed her in a solo she created and performed; “Grief, a work in progress”, at Links Hall as a means to process the loss of her mother. Ann has been a teaching artist since 1990 where she began in the Chicago Public Schools and most recently at Columbia College Chicago as a full time faculty in theatre. Her greatest love is to work collaboratively in ensemble with the Viewpoints and constraint-based approaches to creative process.

Kim O’Kelley-Leigh (Writer & Performer) – Kim O’Kelley-Leigh's career began when she was 19 as a backup singer for Frankie Valli & The Four Seasons, performing on tour all over the Eastern Seaboard and England, in over 75 venues, including Madison Square Garden in N.Y.C, Garden State Arts Center in N.J., and The London Palladium, to name a few. Her next job was on tour with Perry Como, opening his show and backing him up, in a 4 person singing and dancing group called “Good Stuff.” This time performing again on the Eastern Seaboard, in venues more like Westbury Music Fair in N.Y., a theatre in the round. Next, she found herself on tour, singing two part harmony, promoting Chris Hillman’s, formerly of the The Byrd’s, Clear Sailing album. Chris and Kim sang together on another tour, this time, without the band, using just their voices, his guitar and mandolin, at venues like The Bottom Line in N.Y., and The University of Colorado Boulder, with guest artists David Crosby, Roger McGuinn, Gene Clark and Rick Roberts. Kim has also done numerous national and regional commercials as a singer and actress in Los Angeles, including for Butterfinger candy bars, McDonalds, Macy's, El Pollo Loco, Bubble Up soda, and many other advertising campaigns. Her television shows include A House of Secrets and Lies, In Search of Dr. Seuss, Growing Pains, and Ohara. Her film credits include Stephen Spielberg’s "Hook" and the 2002 independent film "Salt". For ten years Kim partnered with playwright Raymond J. Barry performing in four companies each of his three character plays “Mothers' Son” and “Once in Doubt” at the Los Angeles Theatre Center, People’s Light and Theater Company in PA, and other national venues as well as internationally at the Edinburgh Festival. Kim’s other theater credits include three companies of the musical "Pump Boys and Dinettes" playing Rhetta Cupp, at The Las Palmas Theater in L.A., The La Miranda Theatre, with Adrienne Barbeau, and The Cherry County Playhouse, in Traverse City, Mi.  She also played Ruth, Henri, and Orphan, in Paula Vogal's play "And Baby Makes Seven" with Valerie Landsberg at The Los Angeles Theatre Center. Kim currently teaches piano, singing and songwriting to children and adults both in person and on-line. She is also a meditation teacher, and a private life and recovery coach, specializing in one’s spiritual, emotional, mental and physical well being. She has taught multiple workshops in L.A., inspired by her book "Silent M.a.g.i.c. and Other Remedies A Journey of Transformation, A Spiritual Journey" published in 2010. She was an award winning finalist in the self-help motivational category of the 2010 International Book Awards. Kim moved to Bend, OR seven years ago from Los Angeles with her husband Randal, daughter Kyla, their 3 cats, 3 birds, 1 tortoise, 1 dog and two fish tanks full of beautiful fishes.

Michelle Mejaski (Director) - Michelle moved to Bend, Oregon from Indianapolis, Indiana with her husband, Mike in 1996.  She studied tap and jazz since age four at Dixon Dance Studio, On Your Toes Studio, and at Ball State University.  She founded Gotta Dance studio & company in 2001.  She grew her business from a small, recreational, one room studio to an award winning, competition studio before selling it in 2016 to pursue her new business, Mejaski Choreography & Productions. Over the past 20 years, Michelle has choreographed for: local high schools, BEAT children’s theater, Cascade Theatrical Company, 2nd Street Theater, Topsoil Productions, Cat Call Productions, The Tower Theater, Obsidian Opera, Bend Opera, Shore Thing Productions, Lurking Squirrel Productions, and Thoroughly Modern Productions.  Her stage and choreography credits include Cabaret, Chicago, The Producers, Little Shop of Horrors, Spring Awakening, A Chorus Line, Singing in the Rain, The Rocky Horror Show, God Spell, Oklahoma, Les Misérables, White Christmas and RENT, to name just a few!  Michelle is an award-winning dancer who has had the privilege to train with instructors from Hollywood Vibe, New York City Dance Allice, L.A. Dance Force, NRG, and Manhattan Dance Project.  Michelle has had the privilege to tap internationally. She has attended, performed in and trained with tap legends such as Michele Dorrance, Sam Weber and Dianne Walker at the Vancouver Tap Festival.  Michelle has performed professionally with the troupe, Cirque du Musee.  Michelle is a principal dancer with the tap troupe, Central Oregon Rhythm Project.  She was the first American to be accepted into the Croatian Tap Festival where she trained with Chloe Arnold of The Syncopated Ladies and Sara Reich of Post-Modern Jukebox.  Her most hilarious privilege was being a back-up dancer for Weird Al Yankovic!  Michelle began her directorial debut in 2018 presenting Jesus Christ Superstar for Theater in the Park.  Her directing credits include: La Cage Aux Folles, Into the Woods, NINE, and Kiss of the Spider Woman.

Kyla Leigh (Composer) - Kyla is a Los Angeles born composer and song writer specializing in piano.  She has been composing since she was four years old, encouraged by her parents in the entertainment industry.  Her favorite pieces to write are those with meaningful themes and beautifully haunting melodies.