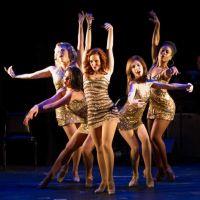 The girl group from Broadway...

This first-rate company of talent hails directly from the Broadway casts of MAMMA MIA, CHICAGO, SPIDERMAN: TURN OFF THE DARK, ROCK OF AGES, MEMPHIS, JERSEY BOYS, MILLION DOLLAR QUARTET, RENT, HAIRSPRAY, ANNIE GET YOUR GUN, LEGALLY BLONDE, CHITTY CHITTY BANG BANG, GREASE, THE WEDDING SINGER, A CHORUS LINE, SISTER ACT, GOOD VIBRATIONS, JEKYLL & HYDE, SPAMALOT, WONDERLAND, BABY, IT’S YOU, ADDAMS FAMILY, NICE WORK IF YOU CAN GET IT, AND MORE! THE BROADWAY DOLLS is a “Best of Manhattan” award-winning concert experience featuring a roster of the most dynamic women of the Broadway community.

Meet BROADWAY DOLL Nicolette Hart! Born and raised in Rochester, NY, Nicolette's parents gave her the passion and drive necessary to persevere in the business called show. By the age of 10, Nicolette was taking voice, guitar, dance and acting classes,and spending evenings and weekends at a local “FAME”-type school. Her deep love of country music would take Nicolette to Nashville for four years. Soon, she was handed a script for "Stand By Your Man: The Tammy Wynette Story,"keeping her in Nashville, singing at historic Ryman Auditorium and Grand OleOpry. When “Tammy” ended, she landed the role of “harlette” singing and dancing with one of her idols--Bette Midler. After wrapping that tour, Nicolette won her first Broadway role...in a little show called RENT. She went on to do Wedding Singer, Legally Blonde and Million Dollar Quartet on Broadway. Nicolette is thrilled to be part of this fierce family of female fabulosity coming to Bend June 29-30, called The Broadway Dolls!