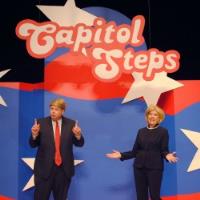 "What To Expect When You're Electing"

"They're the best. There's no one like them, no one in their league." — Larry King, CNN

Tickets: Reserved Seating $50, $60, and $75
Drake Restaurant is hosting a post-show meet and greet with The Capitol Steps for Tower members at the Searchlight level and above! Not a member?

OVER 30 YEARS AGO, the Capitol Steps began as a group of Senate staffers who set out to satirize the very people and places that employed them. In the years that followed, many of the Steps ignored the conventional wisdom ("Don't quit your day job!"), and although not all of the current members of the Steps are former Capitol Hill staffers, taken together the performers have worked in a total of eighteen Congressional offices and represent 62 years of collective House and Senate staff experience.

Most cast members have worked on Capitol Hill; some for Democrats, some for Republicans, and others for politicians who firmly straddle the fence. No matter who holds office, there's never a shortage of material. Says Elaina Newport, "Typically the Republicans goof up, and the Democrats party. Then the Democrats goof up and the Republicans party. That's what we call the two-party system."

Featured parodies will include: Leader of the PAC, Mock The Vote, Stuck In the Middle East Too, All About the Base, Pope and Change, Hard Crazed Right, How Do You Solve a Problem Like Korea?, The Big Benghazi, and Fiscal Shades of Gray, to name a few!