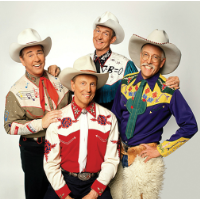 * This show was postponed due to weather. The new show date is Sunday, July 22nd, 2018! Tickets for the postponed February 25th performance will be honored. Refunds are available through the Box Office 541-317-0700.*

Riders In The Sky are truly exceptional.

By definition, empirical data, and critical acclaim, they stand "hats & shoulders" above the rest of the purveyors of C & W - "Comedy & Western!"

For more than thirty years Riders In The Sky have been keepers of the flame passed on by the Sons of the Pioneers, Gene Autry and Roy Rogers, reviving and revitalizing the genre. And while remaining true to the integrity of Western music, they have themselves become modern-day icons by branding the genre with their own legendary wacky humor and way-out Western wit, and all along encouraging buckaroos and buckarettes to live life "The Cowboy Way!"

Riders In The Sky are exceptional not just in the sense that their music is of superlative standards (they are the ONLY exclusively Western artist to have won a Grammy, and Riders have won two), but by the fact that their accomplishments are an exception to the rule as well.

That Riders In The Sky was even formed is a feat of improbable likelihood. What are the odds that a theoretical plasma physicist, a wildlife manager - galvanizer - Life Scout, an English major - shot putter - Bluegrass Boy, and a Polka Hall of Fame member would collectively become "America's Favorite Cowboys?" And even more unlikely is that 30-plus years later, the original members are still "bringing good beef to hungry people" while putting up Ripken-like numbers! The Rolling Stones only made it a few years before replacing Brian Jones; the Sons of the Pioneers constantly changed personnel; even the Ringo-era Beatles only lasted 8 years. (Perhaps Too Slim, as a sophomore writer for the University of Michigan Daily, had an ulterior motive in 1969 by propagating the rumor that Paul McCartney was dead! It's true... go ahead and Google "Paul is dead rumor"...) But the key to keeping the same founding members intact for three decades on the road is more easily explained: "Separate hotel rooms," cracks Ranger Doug!

In 1982, Riders In The Sky became the first, and to date only, exclusively Western music artist to join the Grand Ole Opry, the longest running radio show in history, and thus began a love affair with radio as well. In 1988, they recorded comedy skits for the album "Riders Radio Theatre" and launched the long-running international weekly radio show of the same name on public radio. And keeping pace with the ever-changing technological landscape, in 2006 "Ranger Doug's Classic Cowboy Corral" debuted on XM Satellite Radio, still heard weekly on SiriusXM Channel 56.

Ultimately, exceptional careers do not go unnoticed, and throughout theirs, Riders In The Sky have been honored regularly. In addition to being inducted into the Grand Ole Opry, Riders are in the Western Music Association's Hall of Fame, the Country Music Foundation's Walkway of Stars, and the Walk of Western Stars (in Newhall, CA near Melody Ranch Studios) along with Gene, Roy, John Wayne and other cowboy legends. No less important than their two Grammies, Riders have been the Western Music Associaton's "Entertainers Of the Year" seven times, and won "Traditional Group of the Year" and "Traditional Album of the Year" multiple times. The Academy of Western Artists has named them "Western Music Group of the Year" twice in 5 years, and the National Cowboy & Western Heritage Museum has bestowed Riders with their Wrangler Award statuette three times. It comes as no surprise then that Billboard magazine's Jim Bessman counts them as one of "the most historically significant acts in the history of American music."

Yes, it would be "The Easy Way" to call it a career after 30-plus years, but it wouldn't be..."The Cowboy Way!"  And so, the never-ending trail drive continues. The ponies are rested and watered, and America's Favorite Cowboys are ready to saddle up and ride, bringing good beef to hungry people wherever they may be. Yes, Riders In The Sky are truly an exception to the rule.