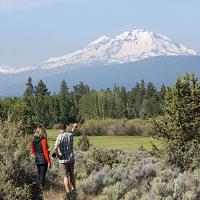 The Human Age, or Anthropocene, is a new geologic era proposed by scientists to describe our modern world that is dominated by humans and their changes to our planet. Join Deschutes Land Trust and retired National Geographic picture editor and the environment editor, Dennis Dimick, for a fast-moving, visual journey that explores and explains the modern human era, the Anthropocene. Presented by the Deschutes Land Trust.

Join Deschutes Land Trust and retired National Geographic picture editor and the environment editor, Dennis Dimick, for a fast-moving, visual journey that explores and explains the modern human era, the Anthropocene. As a native Oregonian, Dimick will present a vivid journey through our modern world of 7.5 billion people that considers our expanding footprint, rising prosperity, and resulting environmental challenges that call for our attention and response. Explore ways to appreciate our place in nature and contemplate how we can contribute towards a positive future for ourselves and the planet.

Having grown up on a Willamette Valley sheep and hay farm near Portland, Oregon, Dennis is the son of fisheries biologist parents, and spent many memorable weeks in his youth and beyond camping, fishing, and hunting in the Oregon outdoors. After studying agriculture and agricultural journalism at Oregon State University and the University of Wisconsin-Madison, Dennis in 1974 began working at newspapers in Corvallis, McMinnville, and Pendleton, Oregon, Walla Walla, Washington, and Louisville, Kentucky. In 1980 he began a 35-year career at the National Geographic Society in Washington, D.C., where he served for more than a decade as the magazine’s environment editor. His work at National Geographic focused on the collision between human aspiration and the planet, and he helped lead the creation of major projects on energy, climate change, global freshwater, world population, and the future of food security.