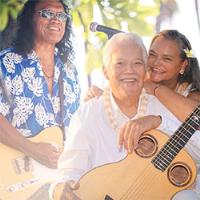 Keola Beamer & Henry Kapono are two legends of Hawaiian music. Each became an icon in the 1970s, both at the creative forefront as Hawaiian music reinvented itself. They have continued to lead the way for over 4 decades.

Keola Beamer’s contributions to slack key guitar during the 1970s began to spark public interest in kī-hō‘alu, launching a statewide revival of the tradition, and his 1978 release, Honolulu City Lights, is the largest selling recording in the history of Hawaiian music. He both created new Hawaiian music, while also being one of first to integrate traditional Hawaiianinstruments into contemporary music. Today he is one of Hawai'i's premier singer-songwriters, arrangers, composers, and masters of the Hawaiian slack key guitar. Beamer has been inducted into the Hawaiian Music Hall of Fame.

His wife Moanalani Beamer performs hula as well as chants and traditional Hawaiian instruments. She has achieved the respected title of “Kumu hula” following a rigorous process of traditional study and rites of graduation.

Henry Kapono skyrocketed to stardom as a member of the popular duo Cecilio & Kapono (aka C&K) and was at the forefront of the music that helped forge the sound of ‘70s music in Hawai`i. Their laid-back, contemporary rock voiced the feelings of an entire generation in Hawai‘i. Today as a solo artist, Kapono is a Grammy-nominated and award-winning singersongwriter, whose sound is a unique blend of rock, reggae, and blues. He was voted the 2021 Favorite Entertainer of the Year and received his 21st Nā Hōkū Hanohano (Hawaiian “Grammy”) award in 2022.