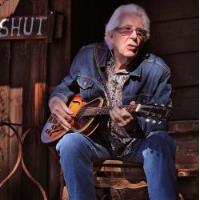 For over 50 years, John Mayall has served as a pioneer of blues music, rightly earning him the title, "The Godfather of British Blues".

In 2013, John signed with producer Eric Corne's label, Forty Below Records, and has since been experiencing a true artistic and career renaissance.

The revival continues with the release of a brilliant new studio album Talk About That, produced by John and Eric at the famed House of Blues Studios in Encino, California. Joining Mayall (vocals, keyboards, harmonica and guitar), Greg Rzab (bass), Jay Davenport (drums) and Rocky Athas (guitar) as special guest is legendary guitarist Joe Walsh, who plays on two tracks, "The Devil Must Be Laughing" and "Cards on the Table," both John Mayall compositions. "We got a message through the studio owner that Joe wanted to come by and possibly play on a track or two as a guest," recalls Mayall. "Who was I to say no to that idea! So, he turned up at noon on the second day and with only a quick listen, plugged in and we did the song in one take. The second song closely followed, and with a smile and a quick photo, he was done and on his way. What a kick for all of us that day!" read more...