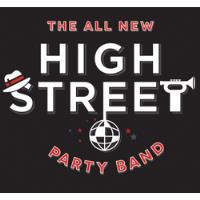 Tickets:  General Admission $28 (plus fee)
It's not a party without some dancing -- we're removing the first 3 rows of seats so come ready to boogie!

The High Street audience interactive experience has been sweeping the nation from New York to Las Vegas…from the Starlight Bowl in Burbank, to Victoria BC….From Florida’s Walt Disney World to The World Games of the Special Olympics! ….From CRUISE SHIPS in the Caribbean to headlining a July 4th festival of over 55,000 people…Jazz and Music festivals all up and down the West Coast! Swing, Motown, Dance Hits, Top 40, Jazz, R&B, Blues, Funk and Good Ol’ Rock n Roll – High Street does it all! thehighstreetband.com/

Opening the evening will be The Gambler and the Thief. Formed in 2011 in the heart of California, The Gambler and The Thief is a Alternative Folk Duo finding it’s influence from bands like Over the Rhine, Wilco, Gillian Welch, Fleetwood Mac, Ryan Adams, and Patty Griffin. What is now a husband and wife collaboration began as a musical partnership between singer/songwriter Vanessa Dalrymple, and multi-instrumentalist/producer Tim Dalrymple. After playing around Southern California, Nashville, and most recently touring with Vertical Church Band out of Chicago, the two have made their home in quiet Bend, Oregon where they are steadily building a local following. thegamblerandthethief.com.

All proceeds go to benefit the 300 orphan children at Otino Waa Children’s Village, located in northern Uganda. Otino Waa is a Bend-based nonprofit that was started by a couple from Bend in 2003. It includes a primary and secondary school, medical clinic and housing for all the children. To learn more, visit www.otinowaa.org