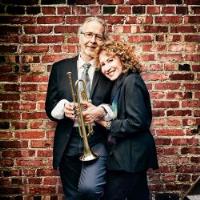 Herb Alpert and his wife, the Grammy award-winning vocalist Lani Hall, and their gifted band, perform an eclectic mix of American standards. Everything from Cole Porter to the Beatles. From classic Tijuana Brass to Brasil ’66 to improvisational jazz. The 2018/19 tour features a video screen that displays many classic moments from Herb & Lani’s music careers. (Click here to listen to Alpert’s cover of, “Michelle” from “Music Volume 1”, and click here for the official video of, “What a Wonderful World.”)

Last year was a banner year for Alpert. His two recent albums, “The Christmas Wish” and “Music Volume 1,”both reached the top of the Contemporary Jazz charts, and in January 2017, Alpert was nominated for his tenth Grammy for his 2016 album “Human Nature.” In addition, thirteen of Herb’s albums returned to the Billboard Top 50 Catalog Jazz albums chart. Eleven of his titles are currently in the Top 100 Jazz albums on Amazon. Billboard also listed Herb at #7 on their Greatest Of All Time Billboard 200 Artists.

A 2006 Rock and Roll Hall of Fame inductee, Alpert’s albums have sold over 72 million copies, and 29 of his records have reached the Billboard 200. Herb talked with public radio music show Sound Opinions about his remarkable, multi-faceted career. Listen to the interview here.

Two-time Grammy award-winning vocalist, Lani Hall, was the lead singer and “voice” of Sergio Mendes’ iconic group, Brasil ’66. She has the distinction of recording over 22 albums in 3 different languages: English, Portuguese and Spanish. She is also known for her recording of the theme song to the 1983 James Bond film, Never Say Never Again. She penned many English lyrics for the Brazilian songs she sang while with Brasil ’66, as well as throughout her solo albums. She is also the author of Emotional Memoirs, a book of short stories, fiction and non-fiction, with personal memoirs that lead the reader in to each story.

Through the Herb Alpert Foundation, Herb and Lani have dedicated their lives to philanthropy, funding programs that help bring creativity to young students and keep creativity alive for all the arts, for artists young and old, including jazz education and programs that teach compassion and well-being.

In 2010 the Herb Alpert Foundation came to the rescue of the Harlem School for the Arts as the doors were about to be closed for good. Now, with a new board of directors and management, the school is flourishing and a beacon for kids all around the NY area. If you want to see a “feel good” program---Check it out.