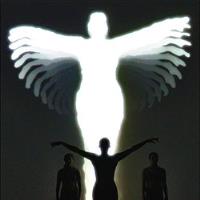 Packages give attendees the ultimate viewing experience! Spend the first half of the show from the audience and then the second half from BACKSTAGE! You'll get to see how the magic comes to life in real time.

Since 2008, Catapult Entertainment has performed their unique live shadow dances in over 100 cities, from Lithuania to Lincoln Center to Las Vegas . Whether guesting on Oprah, Conan O’Brien, the Oscars, or reaching the finals of America’s Got Talent, Catapult prides itself on melding cutting edge technology with classic dance and acrobatic techniques.

As Howie Mandel put it: “Catapult Entertainment has been CATAPULTED!” Howard Stern bowed and called them a “million dollar act.” Heidi Klum still carries a crush, and Mel B just wanted their bodies! No other company has the proprietary technology for creating color shadows. Catapult has provided shadow choreography for an original musical bound for Broadway next season and continues to create new work and to innovate within the genre. There is no question that Catapult is a rising star in the performing arts and the premier company of its kind in the world.