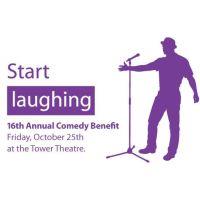 The 16th Annual Comedy Benefit 2013 is a gathering for Central Oregon and is the primary fundraising event for Big Big Brothers Big Sisters of Central Oregon.

Todd Armstrong’s 2010 New Year’s Resolution was to “try stand-up comedy five times” to overcome the speaking anxieties of becoming a Teacher. He is now a Comedian who represented Portland for Comedy Central's "Comics to Watch". He will not be found in a classroom.
He can be found impressing audiences with his unique brand of intelligent and fast-paced humor at Clubs, Colleges, Festivals, Zoo Fundraisers, Bars and Halls. Audiences are shown his likeable attitude, clever wit, energetic charm, stranger than fiction stories and cleverly crafted jokes. Todd has opened for many of today's top comedians; Bill Burr, Marc Maron, Nick Kroll, Chelsea Peretti, Todd Barry, Rob Schnieder, Jon Lovitz , Tommy Chong and more.

Adam Norwest was born with the ability to make people laugh. He began performing professional improv comedy at the age of 13, and just a few years later stepped into the stand-up spotlight. In a short period of time Norwest was featured on "Comcast on Demand", and cable TV's "Man Up, Stand Up". In 2012, Adam was named "CMT's Next Big Comic".
The Seattle Native uses his energetic style and natural confidence onstage to make his stories about dating, his family, and looking so young not only funny, but relatable and engaging as well. Adam mixes his clever material in with crowd interaction for a truly memorable experience.
Very, very, funny stuff man. You still live with your parents?" -Bob Saget "Genuinely hilarious." -Caroline Rhea

Individual tickets are available for $50 or 2 for $80. We also have Corporate Rows available starting at $850. Contact Big Brothers Big Sisters for tickets, sponsorship or corporate row information at 541,312-6047, www.BBBSCO.org or Gblack@bbbsco.org

This fundraising event aims to increase the number of children served in Central Oregon. You make a difference by providing professional, trained staff to carefully screen volunteers and match them in long-term, safe mentoring relationships, while providing necessary ongoing management and support for the volunteers, children and families.  Through this program, our staffs, volunteers and parents are held accountable for each child in our program achieving..
-Higher aspirations, greater confidence and better relationships
-Avoidance of risky behaviors
-Educational Success