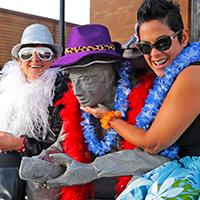 Two nights of comedy about Bend, by Bend and for Bend, benefiting the Tower Theatre Foundation

Take a look at our live & silent auction deals

Seating Note: the Follies is a show and a party--we encourage mingling and mixing. Seating is first-come, first-served in designated sections. Seats can be held starting at 6:30 pm, so patrons can enjoy the cocktail hour and silent auction before the show.