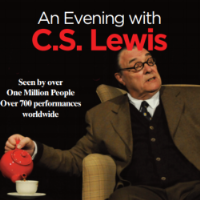 The year is 1962 and C.S. Lewis, the famous British author, is hosting a group of American writers at his home near Oxford. They are about to experience a captivating evening with a man whose engaging conversation and spontaneous humor made him one of the great raconteurs of his day. Seated in his living room, he recalls the people and events that inspired his thoughts and shaped his life; of his friendship with J.R.R. Tolkien, why he nearly abandoned the Narnia Chronicles, how he came to embrace Christianity and of the American woman who turned his life upside down. David Payne’s AN EVENING WITH C.S. LEWIS has proved to be an enthralling theatrical experience, one which has led many thousands to discover, or rediscover, the continuing impact of a man who died over 50 years ago and whose collected works made him one of the literary giants of the 20th Century.

London born actor/playwright David Payne’s first encounter with C.S. Lewis was when, as a teenager, he was given a copy of Lewis’ best-selling book Screwtape Letters.  Little did he realize that some 40 years later he would be gaining a reputation for his portrayals of its famous author. He has played Lewis in a number of productions of Shadowlands, in his self-penned Weep for Joy, in more than 500 presentations of An Evening with C.S. Lewis (My Life’s Journey) and St. Jack & The Dragon a touching yet sometimes hilarious account about the relationship between Lewis and his adopted mother, Janie Moore. Payne’s latest self-penned Lewis based show is Wardrobes & Rings, which focuses on the very last meeting between Lewis and his great friend, J.R.R. Tolkien. To learn more about David Payne, visit www.aneveningwithcslewis.com. ​