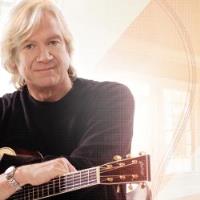 Having chalked up nearly fifty years at the peak of the music and entertainment industry, Justin Hayward’s voice has been heard the world over.  Known principally as the vocalist, lead guitarist and composer for the Moody Blues, his is an enduring talent that has helped to define the times in which he worked. Over the last forty-five years the band has sold fifty five million albums and received numerous awards. Commercial success has gone hand in hand with critical acclaim, The Moody Blues are renowned the world over as innovators and trail blazers who have influenced any number of fellow artists.  Justin is honored with the Moody Blues on the Rock Walk Hall of Fame on Sunset Boulevard.

Whilst releasing solo albums and DVDs and working on many different projects, including new solo recordings, Justin continues to tour with the Moody Blues all across the world. Justin records in Italy and France of which he says, “Spending time making music in a beautiful place with your friends is every songwriter’s dream”. His latest album of new songs ‘Spirits Of The Western Sky’ – for Eagle Rock – was followed by several solo tours, and most recently a ‘live in concert’ DVD ‘Spirits…Live’, which reached No1 on the Billboard Video chart. “My acoustic solo tours give the perfect balance to the big production of the Moody Blues concerts. I’m so lucky to have both”. His live solo show is currently being shown all over the USA on PBS TV.

He is touring the UK, Europe and the USA in 2015 with The Moody Blues, and as a solo artist – accompanied by Mike Dawes, one of a new generation of young exceptional and gifted guitar players.

“I have spent most of my life, so far, on the road”, says Justin. “Playing live and creating a small piece of magic in a room is like a drug to me, one that I never want to give up”. His is a talent that has helped soundtrack more than a generation and created a legacy that remains undimmed.