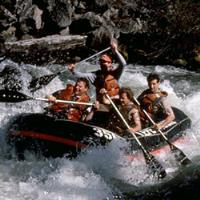 ADMISSION IS FREE, BUT WITH A TWIST – YOU CAN PAY WHAT YOU DECIDE AFTER THE FILM.

Bob McGraw (Tim Matheson) is in his 12th year of college, goofing his way through life. That is, until he and three loser friends are bribed to represent the university in an intercollegiate raft race. Their amateur and adolescent antics impress a few co-eds but make enemies of a team of Marines and preppy Ivy-leaguers who stop at nothing to win the waterlogged competition.

Ever found the locales in a movie more impressive than the plot or the settings more alluring than the actors? Well, that happens regularly in films shot in picturesque Central Oregon! The Tower Theatre Foundation joins the Deschutes Historical Museum to present a different kind of film festival this July. Titled “Made in Central Oregon,” the Tower screens three examples of our region’s claim to cinematic fame.