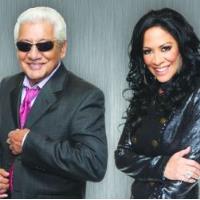 Jazz At The Oxford Concert Series
"The love affair between Pete Escovedo and the world of percussion took off like wildfire, and is stil burning 45 years later." Los Angeles Times SOLD OUT

Latin Jazz legend and timbalero Pete Escovedo leads what is widely considered one of the finest ensembles in Latin jazz, a mix of musicians from both Los Angeles and the Bay Area. The sound is a joyous concoction of Latin rhythms with elements of jazz, R&B and funk that is hard to resist.

A California native, Escovedo storied career started with his brother, Coke, and the Escovedo Brothers Latin Jazz Sextet.  In the late '60s, guitarist Carlos Santana hired the two brothers for his hugely popular group. In 1970, Pete and Coke founded the band Azteca, a cooperative 14-piece Latin big band, recording two albums for Columbia Records.  Since that time, Pete has performed consistently and considered one of the standard bearers of Latin Jazz.

Joining Pete on stage will be his daughter, Sheila E., a nationally recognized drummer, percussionist, vocalist, songwriter, performer, arranger, producer, composer, instrumentalist, actress and humanitarian. Sheila's résumé is extensive including MTV's Best Video Award for "The Glamorous Life," and touring with Prince. She has played on countless albums, including the soundtrack to "Prince of Egypt," featuring Whitney Houston and Mariah Carey, successful Japanese artist Namie Amuro (whom she also toured with in 1996 and 2002) and Gloria Estefan's hugely successful "Mi Tierra."

Performing on Valentine's Weekend in Bend, this is a very rare opportunity to experience Latin jazz at its most finest. It's a performance you do not want to miss!