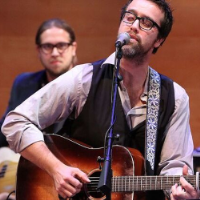 THE CANYON
a rock & roll neighborhood
Laurel Canyon originates from its intersection with Sunset Boulevard in West Hollywood and slices it's way through the Hollywood Hills. It winds and twists its way high above the city where we find Laurel Canyon residents: The Byrds, Buffalo Springfield, Carole King, James Taylor, the Mamas & the Papas, Joni Mitchell, Crosby Stills & Nash, The Eagles, Linda Ronstadt, Jackson Brown, Jim Morrison, Neil Young and the host of other legendary talent who resided there from 1965 through 1976....

THE SHOW
songs & stories & multi-media
"Live from Laurel Canyon - Songs and Stories of American Folk Rock" is a 90 minute retrospective of music and stories of some of the most influential artists who lived in Laurel Canyon between 1965 and 1975.   Similar to other legendary rock and roll neighborhoods of the same era like Haight Ashbury in San Fransisco or Greenwich Village in the NYC, Laurel Canyon was a community of artists who would forge new genres of music (Folk Rock) and forever change the look, sound and attitude of American pop music.   Bands like The Mamas and The Papas, the Byrds, Buffalo Springfield, Doors, Crosby, Stills, Nash and Young, James Taylor, Carole King, Joni Mitchell, Jackson Browne, Linda Ronstadt, America, and the Eagles.  Much more than a 'tribute' act, Live from Laurel Canyon not only performs the music you love, but shares with you the stories that inspired them.  Live from Laurel Canyon is a journey through a special time in American pop music... won't you join us?