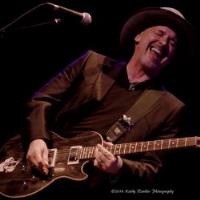 A Message From Too Slim!.m4a

New York writer Dave Rubin stated, “If Tim “Too Slim” Langford only played slide guitar, he would slither around most other blues guitarists and take a ferocious bite out of their pride. But as the sole six-string slinger, songwriter and lead vocalist of the power trio Too Slim and the Taildraggers, Langford is a force of nature leaving musical tracks others try to follow.”

Those tracks led to Nashville, where Langford has been hanging and working with the big dogs. After teaming up with Grammy-winning producer Tom Hambridge (Buddy Guy, ZZ Top, Joe Louis Walker, George Thorogood, Susan Tedeschi…) Langford headed into the studio to track a new album, Blue Heart, released in June 2013. Now Langford has again teamed up with Tom Hambridge to co-write and record three new songs for the upcoming June 2014 release of “Anthology”. “Anthology” features the recordings of Langford from the Underworld Records catalog spanning the last 15 years. To top it off, in May 2014 through January 2015, Tim “Too Slim” Langford was chosen to be featured at the Nashville International Airport and the Country Music Hall of Fame alongside the likes of Elton John, Emmylou Harris, Rodney Crowell, Buddy Miller, Ray Stephenson, and The Carolina Chocolate Drops.

Creating an eclectic style of blues and rock that has become a genre all its own, Tim “Too Slim” Langford’s ever-evolving musical direction cannot easily be classified. Too Slim and the Taildraggers effortlessly cross genres, flavoring Blues with Rock and Americana, they appeal to audiences of varying musical tastes.
Tim Langford has won multiple individual awards for Best Guitarist, Best Slide Guitarist, and Best Songwriter and the band are in the Hall of Fame in three Northwest blues societies. The band’s 2013 release “Blue Heart” Reach as high as #3 on the BillBoard Top Blues Album Chart and Shiver,the bands previous release was a 2012 Blues Music Award nominee for “Blues Rock Recording of the Year”.

PLUS, all Too Slim ticket holders are eligible for a discount on tickets to Tin Pan Theater's screening of "Between Me My Mind" starring Trey Anastasio of Phish. Discount only valid for tickets to 9:30pm screening on the 17th. Once you have purchased tickets you can call our Box Office for the discount code, or pending availability, show your ticket stub at the Tin Pan doors after 9pm. More details available: http://www.tinpantheater.com/between-me-and-my-mind