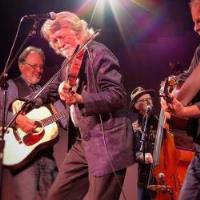 Get ready to party to the live music of John McEuen. Bring your cell phones and participate via mobile bidding in the 10th annual BandTogether for Scholarships silent auction throughout the evening. All proceeds from the event are awarded as scholarships to graduates from Central Oregon high schools who demonstrate a serious commitment to a career in healthcare. Learn more about the Healthcare Scholarship Foundation of Central Oregon.

John McEuen and the String Wizards

When John initiated the Will the Circle Be Unbroken album with the Nitty Gritty Dirt Band it brought together the icons of Bluegrass, Country, and West coast country rock. Six hot August Nashville recording days produced this benchmark album, relevant to this day (Amazon top-30 still!).

McEuen has now assembled a unique cast for a special night to share the music and memories of the landmark Will the Circle Be Unbroken record and his incredible career with the Nitty Gritty Dirt Band. The cast includes:

All join host John McEuen, with his banjo, guitar, fiddle and mandolin, as they share (in front of the screen) hits and stories behind the music, leading up to that magic time when three generations came together.

His multi-media show with archival photographs, film, (including 8mm footage from 1967), Circle session photos, narrative (and early) NGDB music takes us on his 50+ year journey - interwoven with Dirt Band favorites and hot bluegrass.

A unique part of the show covers the 1977 Russia trip, and what happened behind the Iron Curtain to the first American band to tour there – 28 sold out shows.

The evening features classic NGDB favorites and music from McEuen’s new highly praised record - Made in Brooklyn - on Chesky Records. (Stereophile Magazine’s Record of the Month; also honored with Best America album by the Independent Music Awards, March 2018). The audience sees the entire span of John McEuen’s years in music, and is taken back through some of the best years of their lives.