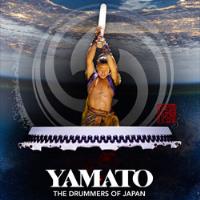 A group of dozens of players start their performance by hitting a Japanese taiko drum made from a large 400 year-old tree. They move their whole bodies to strike the drum with everything in their souls, creating a powerful surge of energy. Their live performances are so full of intensity that they make people's bodies jump and their hearts race faster. Audiences are overwhelmed by the beat of the music, as their bodies are uplifted in sync with the powerful sounds. This group, from beautiful Nara Prefecture in Japan, is able to exhibit great originality and innovation through this traditional Japanese musical instrument, the wadaiko (Japanese drum). This is the epitome of the Japanese spirit, a roaring sound that will make you experience new exciting adventures.

Yamato was formed in 1993, debuting at a Shinto shrine festival in the group's hometown with their original song "Hyu-ga (The sunrise)." Since then, 25 years have passed. So far they have been invited to 54 countries around the world, playing in more than 3,500 performances, and attracting 7 million viewers. Their performances, featuring various stage formations, have received raving reviews; their fame keeps spreading more and more, and the British media has even called their sound "The music of the body." Yamato is based in a village called Asuka, known as the birthplace of Japanese culture, appearing in international performances from 6 to 10 months a year with an explosion of Yamato (ancient Japanese) spirit. They are proud to be the group with the largest number of international performances among all Japanese performing art groups.

We want to be Creative

This is the motto of Yamato. This is why, aside from the musical instruments, the members of the group live together in a community to create everything by themselves. This includes the musical compositions, theatre productions, theatre settings, lighting design, choreography, performance techniques, costumes, makeup, stage settings and props... even the bachi (sticks) used in the performances are all their own original work. This is at the core of Yamato's performances around the world. Yamato uses this creativity to convert wadaiko into a performing art that can reverberate in Japan, Asia, and the rest of the world.

Wadaiko has inspired many people since ancient times. Yamato holds their respect for this tradition in their hearts as they continue to create and innovate within their art.