The Tower Theatre was completed in 1940 by general contractor Fred Van Matre. Double shifts of workers were used to complete the project in just three short months.

Symbolic of its name, the Theatre was surmounted by a large tower that rises 40 feet above the building, making it approximately 78 feet above the street. The tower itself was accentuated by more than 1,200 feet of neon tubes of green and gold that lead a viewer’s eye from the sign, down the facade of the building, across the marquee and into the ticket booth and the entrance.

Imported travertine marble from Italy was laid by the Lutz Marble Company of Portland to greet patrons of the Theatre. The project involved removal of over a ton of rock by Ed Eastman to accommodate heating and ventilation systems. Seating capacity of the Theatre was originally 998 including the main floor and balcony seats. A large 30 foot wide X 18 foot deep stage provided additional space for vaudeville shows and plays as well as movies. The interior space was lined with acoustical tiles, and wall-to-wall carpet to deaden any undesirable echoes or “dead spots.” The women’s lounge, on the mezzanine floor, was one of the show places of the theatre. It was finished in choice wood of knotty pine, and had special lights. 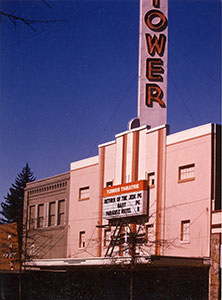 Ken Hodkinson was the first manager of the Tower Theatre. As the son of W.W. Hodkinson, founder of Paramount Pictures, Hodkinson’s experience went back many years. Films for the Tower were provided by four different services: Columbia, RKO, Monogram and Warner Bros. The aim was to supply a well-balanced program of first run shows. The programs included Disney cartoons, “March of Time” news and “shorts” which supplemented the feature film of the evening. Managers at the time boasted that the Tower would show movies on the Sunday-Monday-Tuesday program prior to the programs being shown in Portland. The movie “Four Wives” was the first picture shown at the Theatre. Billed as the sequel to “Four Daughters” the stars of “Four Wives” included Priscilla Lane, Rosemary Lane, Lola Lane, Gail Page, Claude Rains, May Robson and Frank McHugh.

For many years the Tower Theatre thrived as a cinema and intermittently as a performing arts stage. In 1948, in addition to showing all the hit Hollywood movies, the Theatre hosted a weekly amateur hour, fashion shows, several variety shows and even a visit from the General Platoff Don Cossack chorus—direct from Russia—which performed Cossack melodies, battle songs and dances.


The End of an Era

When the Theatre began to show mounting signs of age and with the advent of multi-screen theatres, the Tower was closed. The owners, a large movie theatre chain, chose not to renovate and, in 1994, sold the Theatre to a partnership made up of Win and Laurel Francis, Michael and Pat Forman, Bruce Hinchliffe and Sandi Swanlund. They were interested in redeveloping the Theatre into retail and office use. When approached by a group of local citizens wanting the building to be restored as a public theatre, the partners became actively involved in the effort.

In a first attempt, the partners gave the Regional Arts Council of Central Oregon (RACOCO) a discounted lease to operate the theatre as a multi-purpose venue, with the goal of gauging both consumer and user demand for the facility. Over a nearly two-year period, although still without heat and in a state of significant disrepair, the theatre hosted nearly one hundred events attracting thousands of patrons to downtown Bend. In 1995, on behalf of RACOCO, the City of Bend purchased the theatre through a friendly condemnation and agreed to hold the building until funds could be raised for a private non-profit organization to purchase, restore and operate the theatre. However, organizational challenges for the theatre’s operator and continued deterioration of the facility forced the City of Bend to close the theatre in 1996.

The Effort to Renovate the Tower

In the Fall of the same year, Gary Capps, Executive Director of Bend’s Chamber of Commerce, made one final attempt to jumpstart an effort to renovate the Tower Theatre. Putting out a public call for volunteers interested in working on a fundraising campaign, a small group banded together. This grass-roots task force conducted a thorough study of the feasibility of the restoration and operation of the Tower as a performing arts and education center for the community.

After a series of public meetings, designed to determine community interest for the project, a group of thirty dedicated, local residents pulled together, formed a board, and began the arduous task of resurrecting the Theatre.

Early in 1997, this board approached the city of Bend for a purchase option and accepted the city’s challenge to generate $300,000 of cash and in-kind pledges of support for the project. In July, the board incorporated The Tower Theatre Foundation as a non-profit, 501(c)(3) organization. One month later, the foundation had raised cash and in-kind pledges of $362,590 thereby exceeding the city’s challenge.


The Return of the Tower


After a lengthy period of study, the foundation's board established a committee charged with developing a capital campaign. The campaign, called “Encore! The Return of the Tower Theatre,” was launched in 1999 with the goal of securing sufficient funds to enable the foundation to purchase, renovate, endow, and operate the theatre. Using funds generated in the first phase of the campaign, the foundation was able to purchase the Tower from the city of Bend in 2001.

DKA Architecture and Design, P.C. and its team of designers worked on the project for three years prior to construction. The team included Candela Theatre consultants and B.R.C. Acoustics, both of Seattle, Washington, Interface Engineering of Salem, Oregon, and W&H Pacific of Bend, Oregon. Foundation board members also brought to the table many talents including an interior design professional, event promoters and community leaders.

The original intent was to restore the Tower to a state of utility. However, it was apparent over time that changes in the scope of the renovation project would provide the community with a more flexible performance space. These changes raised the campaign goal to $4.2 million.

Renovation, the foundation's second goal, was begun by Kirby Nagelhout Construction in November of 2002. The project included the expansion of the interior space from 10,432 to 13,630 square feet, an expanded basement to accommodate an orchestra pit with a motorized sypra lift, new box seats, and an expanded lobby area. In addition, the Tower features high quality sound and lighting equipment, a video projection system, and soon, a full 35mm film projection system.

In May 2003, while construction was underway, the foundation hired its first Executive Director, Patricia Iron, to assist the board in its transition from capital campaign fundraising and construction to the third goal, the operation of the Tower Theatre. The grand re-opening was held January 30, 2004.

Since then, the Tower Theatre has grown and the Foundation is now managed by Executive Director, Ray Solley