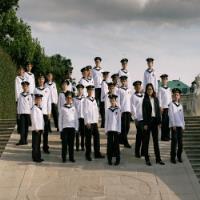 No group of child musicians has won more renown than the incomparable Wiener Sangerknaben, founded by Emperor Maximilian I in 1498. Six centuries later, the famed Vienna Boys Choir continue to delight music-lovers across the globe with their purity of tone, distinctive charm and a diverse, crowd pleasing repertoire that encompasses Austrian folk songs and waltzes, classical masterpieces, beloved pop songs, holiday favorites and medieval chant. Gifted musicians with voices of unforgettable beauty, they carry on the an illustrious tradition as the world’s preeminent boy choir who present timeless music with a universal popular appeal. With its broad repertoire, a Vienna Boys Choir performance is never just a concert for classical aficionados, it’s a musical event that appeals to all ages. This world-class ensemble gives 80 concerts a year in North America, most at near capacity or sold out.

In the coming seasons, the Choir will be staging operas and choir concerts in their brand new hall named for the choir’s late director Dr. Eugen Jesser. The hall’s opening night concert in December 2012 featured the Vienna Philharmonic conducted by Franz Franz Welser-Möst. The hall will act as a music and theater center for young people throughout Vienna. The Choir continues to appear in the annual New Year’s Concert with the Vienna Philharmonic conducted by Mariss Jansons which is televised in over 70 countries. Their film “Silk Road: Songs Along the Road and Time” from director Curt Faudon recently aired on selected public television stations nationwide.