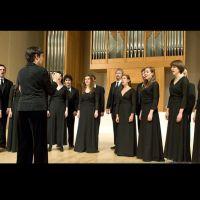 The UO Chamber Choir will perform for FREE as part of the annual University of Oregon Music and Dance performace in Central Oregon.

The University of Oregon Chamber Choir, recently returned from performing at an international choral festival in Estonia, will give a concert of its tour program at 7 p.m. in Bend's Tower Theatre, 835 Northwest Wall Street. Admission is free. The program, directed by Professor Sharon J. Paul, includes Renaissance music by Claudio Monteverdi, Luca Marenzio, and Carlo Gesualdo, some American spirituals, plus music by Johannes Brahms, Sydney Guillaume, and Billy Joel. The choir will also perform some modern songs of faith and praise, including “The Old Church” by Stephen Paulus, “Christ the Appletree” by Stanford Scriven, and “Omnis Spiritus” by UO Professor Robert Kyr, written especially for the tour.

The Chamber Choir performed at the 12th International Choral Festival in Tallin, Estonia, April 14-17. This is an extremely prestigious event, featuring 50 choirs from 14 countries... and the UO Chamber Choir is the only one from the United States! The invitation to audition for the festival came from Estonian choral guru Hirvo Surva, who was at the UO in 2006 for the Music Today Festival, and again for a brief residency in 2009. He heard the UO Chamber Choir both times, was very impressed, and recommended them for an audition.

The choir also performed in Tartu, Estonia, and in Helsinki, Finland, on its tour. The UO Chamber Choir is a highly select chamber ensemble of 18 to 24 voices. Members are mostly graduate and upper-level undergraduate students with excellent sight-reading skills and vocal ability. The Chamber Choir performs music from all periods and styles, specializing in a cappella repertoire. The Chamber Choir has performed at the American Choral Directors Association's Northwest Divisional Conference, the Music Educators National Conference's Northwest Convention, and the Oregon Music Educators Association's State Conference.