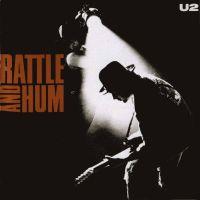 Did you Know? Many of the songs performed in Rattle And Hum are altered from their original release, most notably: "With Or Without You", which contains a whole new verse to end the song.

; "Exit", which includes the chorus from "Gloria" (interestingly, the Van Morrison song, although U2 also had an early hit titled "Gloria"); and "Bad", which adds verses from the Rolling Stones' "Ruby Tuesday" and "Sympathy For The Devil".

This film documents the 1987 North American tour of the great rock band, U2. Fresh with their success of their best selling album, The Joshua Tree, the band plays monster gigs. Along the way, the band takes the opportunity in indulge in some special musical activities like playing with BB King and performing "I Still Haven't Found What I'm Looking" with a famous church choir. All the while, concert footage of the band's biggest hits on tour is featured while Bono speaks his mind on the problems of his homeland.