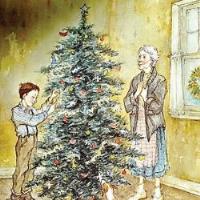 This streamed event is available through December 28.

Capote’s admired and popular short story "A Christmas Memory" was originally published in Mademoiselle magazine in December 1956 and reprinted in The Selected Writings of Truman Capote in 1963 and 1966. The largely autobiographical account takes place in the 1930s and recalls the traditions and activities of a noteworthy time in the lives of the seven-year-old narrator and his cousin and best friend. That woman was Nanny Faulk, whom everyone called “Sook.” She was the eldest sister in the household where Capote’s wayward parents placed him as a young boy. The evocative narrative focuses on country life, friendship, and the joy of giving during the Christmas season, while gently yet poignantly touching on loneliness and loss. Well-known NewsChannel 21 meteorologist Bob Shaw first performed this holiday classic at the Tower in 2014. His new production utilizes period pictures and images to visualize the settings and characters of this Prohibition-era story. Don’t miss the chance to make this tale a sparkling addition to your holiday!

Presented by permission of The Truman Capote Literary Trust