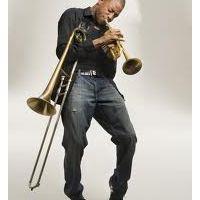 Troy ‘Trombone Shorty’ Andrews has God-given talent, natural charisma and a relentless drive to bridge music’s past and future. His third outing for Verve Records, Say That To Say This (Sept. 10), was co-produced by Andrews and kindred spirit Raphael Saadiq, and sounds like nothing else out there, as Andrews and his longtime band, Orleans Avenue – guitarist Pete Murano, bassist Mike Ballard and drummer Joey Peebles – continue their natural musical evolution. In a very real sense, the torch is passed from one great New Orleans band to another on the new album, which features the first new studio recording from the original members of the legendary Meters in 36 years, as they revisit their 1977 classic ‘Be My Lady,’ with Andrews singing lead and playing horns.

The bandleader and multi-instrumentalist describes Say That To Say This as ‘really funky, like James Brown mixed with The Meters and Neville Brothers, with what I do on top, and we have a bit of R&B from Raphael’s side. All the guys in my band are big, big fans of his, so this is a real dream come true for us. And he’s a fan of New Orleans brass band music, which I didn’t know beforehand. Just listening to his music and the direction he’s going in now, I thought that he would be perfect to work with us. He’s a great producer, but he’s also a musician, so he was able to get in there, jam with us and take us to some different places. And we were able to take him to some different places too.’ READ MORE