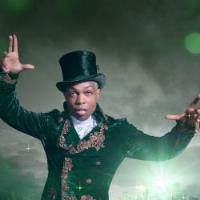 Broadway Actor, MTV star, American Idol Finalist and Viral YouTube personality Todrick Hall is putting a new “twister” on L. Frank Baum’s most classic creation, The Wonderful Wizard of Oz. With over 20 original songs, Hall brings to life this American Classic like you’ve never seen it before. This spring, you don’t have to go to Oz because Straight Outta Oz is coming to a city near you. Watch as Todrick and his talented crew tell the tale of Hall’s adventures from his small town in Texas, to the big Emerald City lights of “Oz Angeles.” The musical shows how a Hollywood hopeful succeeds in the business while dodging falling houses, wicked witches and the infamous “Poppyrazzi.” This show is great for the family with powerful musical numbers, innovative sets, sensational choreography, dazzling costumes and a great social message.

Todrick Hall is a singer, songwriter, dancer, actor, choreographer, costume designer, playwright and director.  In 2010 Todrick Hall rose to fame as a semi-finalist on the ninth season of American Idol.  He focused his talent on creating his own content on YouTube.  His videos of flash mobs to songs by Ariana Grande and Beyoncé became viral video sensations.  Todrick Hall has amassed over 2 million YouTube subscribers and an astounding 420 million YouTube views. He has since choreographed for Beyoncé. He won the 2016 Streamy Award for Breakthrough Artist of the Year.  He is nominated for the 2017 iHeartRadio Music Award for Social Star.
In 2014, Todrick Hall was named one of Forbes’ 30 Under 30 to watch in Hollywood & Entertainment. He also stars in his self-titled MTV show, TODRICK, which he writes and directs. The docu-series shows fans a behind the scenes look at Todrick and his creative team as they choreograph and stage elaborate performance videos.  He has written and directed commercials for Fiat and theme songs for Sesame Street.  He wrote and performed in the Virgin Airlines Safety Video. He has also been a judge on RuPaul’s Drag Race.
He was part of the Tony Award-winning musical Memphis on Broadway and previously took the stage alongside Fantasia Barrino in The Color Purple.  Todrick Hall currently stars as Lola in the Tony Award-winning hit musical Kinky Boots on Broadway, which has had a record-breaking box office run.