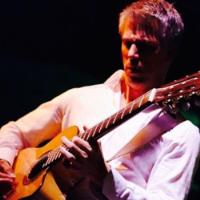 Live At The Tower!
Reserved seating, doors open at 6:30 pm.

​On Wednesday, December 8, the Tower Theatre Foundation presents Central Oregon’s own Todd Haaby and his full six-piece group of world-class musicians to the venues’ month-long celebration of the holiday season. Fresh faces and fresh music join crowd-pleasing fiery Latin/Flamenco guitar numbers from Haaby’s best-selling and regularly downloaded albums "Sola Via," "Into the Night" and "Nu Tierra."

From his debut in 2007 through recent showcases on ABC, NBC and NPR, Todd’s vibrant sound and remarkable energy consistently sells out venues all along the West Coast.

Bend Magazine calls it “MUSIC THAT BEGS YOU TO DANCE, TO MOVE, TO REVEL IN THE EXUBERANCE OF LIFE.”  A&E Magazine described attending Todd’s live shows as witnessing “SOME OF THE BEST AND MOST PASSIONATE MUSICIANS OUT THERE TAKING YOU ON A ROLLER COASTER RIDE OF EMOTIONS. A MUST SEE.”

One of six siblings, Todd’s musical influences started at a young age. Raised in Northern California, Todd’s mother Pat encouraged all of her children to explore their musical abilities by teaching them the basics of music and music theory.

By age 15, Todd received his first guitar as a birthday gift, not knowing that it would prove to be a life changing event. Realizing his new-found passion for this instrument, he dedicated the coming months to constant practice, only showing his face for the occasional PB&J sandwich. Within six months, Todd formed his first band becoming lead guitarist, fulfilling a personal goal. The next three years opened many doors to incredible opportunities which included live concerts, clubs, and radio performances. At age 18 Todd was asked to perform live with Grammy Award-Winning artist Phil Driscoll.

After many years of experimenting with a variety of musical genres, Todd, then 24, was introduced to the sounds of Spain. Attracted by the fiery passion of Latin music, this would mark a turning point in Todd’s musical direction. With a growing love of Spanish music and the fortunate opportunity to travel abroad, Todd developed a unique style all his own.

From riffs he learned as a kid listening to Edward Van Halen, to the explosive sounds of the Gypsy Kings, Todd has combined all of his musical experiences to write and define a flavor of music indicative of Nuevo Flamenco.