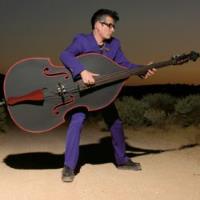 Lee Rocker at the Tower Tonight.mp3

Lee Rocker made his mark singing, playing, standing on, spinning and rocking his giant upright bass in the legendary music group The Stray Cats. Grammy-nominated, The Stray Cats have sold nearly 10 million albums and garnered an astounding 23 gold and platinum certified records worldwide. Founded by Rocker, Brian Setzer, and Slim Jim Phantom, The Stray Cats remain a radio staple, were music video pioneers at the infancy of MTV, and repeatedly brought rockabilly music to the top of the charts.

When they debuted in the early ’80s, the Stray Cats were somehow both ahead of and behind the times, a forward-thinking anachronism: Their sound was rooted in the ’50s, and yet they were the band that catalyzed a rockabilly boom by taking the music to the mainstream for the first time in decades.

And so their performance felt like a victory lap of sorts, beginning with “Runaways,” the first song from their first album. With Lee Rocker slapping at his upright bass with enough force to make the crop of blond hair atop his head shimmy and shake like corn tassels in a violent storm.

The multi-media performance at the Tower features Rocker spinning, throwing, catching and playing his big “doghouse” upright bass. Tower Theatre Foundation Communications Manager, Amanda Bird, asked Lee what influences him the most, and he replied, “My influences are varied and most are from people I’ve had a chance to play with -- George Harrison, Ringo Starr, John Fogerty, Keith Richards and most importantly to me my friend, collaborator, and mentor Carl Perkins.” What is his favorite song to play? “Every time I walk on stage it’s like the first time. I’ve got to say, I still get a jolt of electricity every time I play “Rock This Town!” And rock we will!