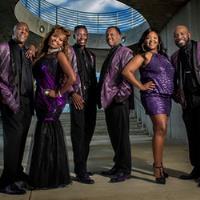 Get ready to relive the hits of Motown and beyond as this exciting, high-energy act unleashes superior vocals and slick dance moves powered by pure soul! Performing a combination of Motown classics mixed with some of the greatest pop and R&B hits ever written, the outstanding singers, dancers, and songwriters of THE SOUNDS OF SOUL maintain a performance schedule that averages over 450 shows per year, featuring hits from The Temptations, The Four Tops, Aretha Franklin, Whitney Houston, The Supremes, Lionel Richie, Tina Turner, Barry White, and more! Since launching in 1996, THE SOUNDS OF SOUL has headlined from Los Angeles to the French Quarter, and selections from their show have been featured at major venues including Miami’s American Airlines Arena and Tampa Bay’s Sun Dome/Yuengling Center. On the airwaves, the group has appeared on the internationally syndicated show “Dance Connection” (seen in over 100 television markets), and they have shared the stage with The O’Jays, Bobby Brown, and funny man Sinbad.