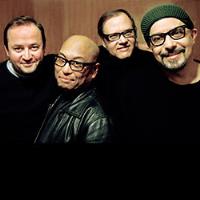 Together since 1980, the three original bandmates have perfected guitar-driven, infectious tales about heartbreak and hope, with echoes of the Kinks and Elvis Costello.

The Smithereens have collaborated with numerous musicians, both in the studio (Suzanne Vega and Belinda Carlisle) and live (Graham Parker and The Kinks). The band's name comes from a Yosemite Sam catchphrase, "Varmint, I'm a-gonna blow you to smithereens!"[2]

The Smithereens are known for writing and playing catchy 1960s-influenced power pop. The group gained publicity when a single from its first album, "Blood and Roses", was included on the soundtrack for, and as the theme song of the 1986 Albert Pyun movie, Dangerously Close, and the video got some moderately heavy rotation on MTV. "Blood and Roses" was also featured on the 1980s TV show Miami Vice

“Everything in The Smithereens’ world is like a film noir shot in psychedelic colors. A great rock ‘n’ roll band.”  --NPR Fresh Air