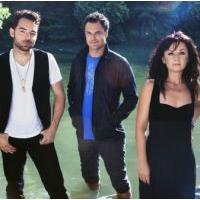 From their first down-beat in 2002, through tours with Bob Dylan and Willie Nelson, The Greencards have won hearts and acclaim for their multi-dimensional Americana vision. Their new GRAMMY nominated album, Sweetheart of the Sun produced by Gary Paczosa (John Prine, Alison Krauss, Sarah Jarosz) is filled with songs that reference water, along with the often-related concepts of motion and travel. The Greencards co-founders Kym Warner and Carol Young focused on those aspects of their lives to craft a unified sonic document, one that catalogs their journeys while transporting listeners to a beautiful, welcoming world. Drawing on their Aussie upbringings, their American experiences and their restless natures, The Greencards use imagery and instrumentation to evoke moods and suggest movement; the songs themselves ebb and flow like tides.

Young and Warner have traveled far, literally and metaphorically, since forming The Greencards in 2002 after transplanting themselves in Austin TX. Their debut album, Movin’ On, earned them a deal with Nashville-based Dualtone Records, so they headed east. Weather and Water, Viridian, Fascination and The Brick Album followed, along with
three GRAMMY nominations - the most recent being 2013 in the ‘Best Folk Album’ category, a 2006 Americana Honors & Awards win as New/ Emerging Artist Of The Year, and a number one position on the Billboard Bluegrass Chart.

“This imported band is making some of the finest Americana around.”–RollingStone.com !

“…they must have inherited the reincarnated musical spirit of Nick Drake. Maybe another way to explain it is if Gillian Welch and Dave Rawlings borrowed some production techniques from Pink Floyd.” -
TWANGVILLE