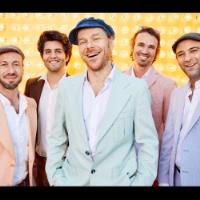 Get ready to party to the live music of The California Honeydrops.  Bring your cell phones and participate via mobile bidding in the silent auction throughout the evening.  All proceeds from the event are awarded as scholarships to graduates from Central Oregon high schools who demonstrate a serious commitment to a career in healthcare.  Want more information on applying for 2019 scholarships?

Click here to register early for the silent auction (bidding opens on Sept. 12)

The California Honeydrops have a reputation as being among the most exciting and dynamic live bands on the planet. With unrelenting energy and a near-encyclopedic knowledge of musical styles, genres and idioms, the Honeydrops have spent a decade playing everywhere from subway stations in their native Oakland, California to sold-out shows in theatres and at festivals all across the globe.

The band has come a long way since vocalist, guitarist, and trumpeter Lech Wierzynkski and drummer Ben Malament started busking in an Oakland subway station. With the additions of Johnny Bones on tenor sax and clarinet, Lorenzo Loera on keyboards and Beau Bradbury on bass, they’ve built a powerful full-band sound drawing on diverse musical influences from Bay Area R&B to funk, Southern soul, Delta blues and New Orleans second-line. More like parties than traditional concerts, their shows feature extensive crowd interaction. “The whole point is to erase the boundaries between the crowd and us,” Wierzynski says. “We want crowd involvement, to make people become a part of the whole thing by dancing along, singing, picking the songs and generally coming out of their shells.”