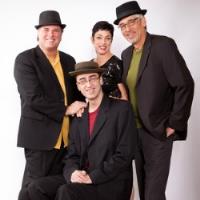 The Bobs have been producing new wave, old school and cutting-edge, quality a cappella since 1981, and they make their Central Oregon debut as part of their "Farewell" Tour.

In 1983, The Bobs put out their first self-titled album. This record earned the group a Grammy nomination and pretty much re-wrote all the rules for vocal group music. “Instrumental” arrangements, dissonance, vocal percussion, ringing harmonics and melodic solo voices all linked with quirkily comedic material—these are the trademark sound of The Bobs—a sound and style that has since been emulated by a cappella groups around the planet.

The Bobs have been described as Manhattan Transfer meets Monty Python…Robin Williams meets Bobby McFerrin…J.S. Bach meets Jimi Hendrix: Grammy-nominated vocal acrobats and certifiable nutjobs. This original “band without instruments” has been skewering the classics, breaking all the rules and clear-cutting their own unique path in the world of vocal music for over 30 years, playing everywhere from Lincoln Center to Berlin’s Passionkirche. To quote one reviewer, “…the Bobs still shine, breaking new ground each time they tunnel out of the sanatorium. The twin keys to the group’s creative safe deposit box are unflagging dedication to vocal excellence and utter disregard for everything else.”

"Their name "BOBS" is an acronym, meaning "Best of Breed," taken from dog shows. They're clearly poking fun at themselves in that moniker, as they do in many ways, and yet after 30 years, the name rings true. If you haven't seen them live and you call yourself an a cappella fan, you're doing yourself a disservice. You'll learn much from their style, their technique, their performance... and you'll love it." - Deke Sharon, Producer - The Sing Off and member of The House Jacks.