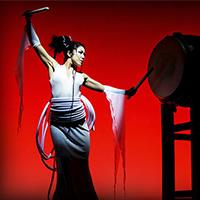 PICK SIX and BECOME A SEASON SUBSCRIBER Buy tickets to six or more CenterStage and/or LessonPLAN shows and get 10% OFF ~ Plus, complimentary exchange and refund privileges

Athletic bodies, contemporary costumes and innovative choreography combine to create spectacular entertainment based on traditional Japanese Taiko drumming. The stars of TAO live, study and train at a compound in the mountains of Japan. They return to Bend to showcase their diverse backgrounds as rock musicians, gymnasts and composers in an explosive show for all ages.

With performers the Chicago Tribune describe as having “extraordinary talent and incomparable muscular zeal,” TAO’s precision, energy, and stamina offer a vibrant take on the traditional art of Japanese drumming, creating a spectacular night of entertainment.

Educational outreach made possible in part by

TAO: The Art of the Drum
In this new production for North America, athletic bodies and contemporary costumes meet explosive Taiko drumming and innovative choreography in a show that has critics waxing lyrical about TAO's extraordinary precision, energy, and stamina. With hundreds of sold-out shows and more than a million spectators, TAO has proven that modern entertainment based on the traditional art of Japanese drumming, has massive international appeal.