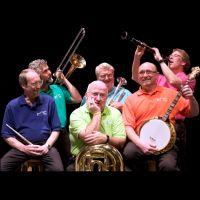 Taking Dixieland Jazz to new heights is a fitting slogan for this high energy band from Bend, Oregon. All of these versatile musicians are equally at home in the symphony playing Beethoven as they are on the street corner playing Louis Armstrong.


The band was formed in May of 2010 when Rick got together a few friends for a jam session.  All but Greg had just finished a performance of William Still's African American Symphony with the Central Oregon Symphony. Yes, there was actually a banjo part for Rick.  It was a match made in heaven.

The band is named after a very popular ski lift at the Mt. Bachelor resort, just west of Bend.  The name sounds fitting as the band continues to climb to the top, recently reaching #1 on the charts for Jazz groups in Bend according to Reverb Nation.

This is just the start, and the band's future plans indeed look promising.  Having a love for the sounds of Trad Jazz, we plan on applying this style to many different genres of music.  Folsom Prison Blues is a perfect example.  What started out as a joke when someone asked if we knew any Train Songs grew into one of the biggest crowd pleasers.  Adding Classical Masterpieces, Beatles Medleys and Disney favorites is only a matter of time, but the standards will always be our true love.

The magic with this group exists in the the way they interact with the audience. Humor and the unexpected play a big part in the show. No one plays Folsom Prison Blues like this band. Look for them soon at a venue near you. Better yet, contact that venue and tell them that you want Summit Express Jazz Band.