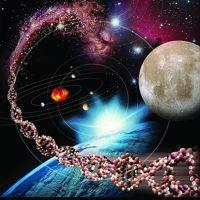 "We will never be able to say with certainty how life did begin, but we will show how life CAN begin..."

Ever since Urey and Miller’s now-famous experiment in 1953 showed that amino acids, basic building blocks of proteins, could form spontaneously from simple inorganic molecules of earth’s early atmosphere, scientists have been making steady progress in understanding how just six elements – carbon, hydrogen, oxygen, nitrogen, phosphorus and sulfur – can form all of the structures of living cells. Deamer is among a select group of scientists working on the cutting edge of science that is seeking to answer one of mankind’s most fundamental questions: How did life originate? Deamer reminds us that all of the naturally occurring elements on earth were formed billions of years ago in pre-existing stars that consumed their nuclear fuel and exploded, violently spewing their own ashes into space, only to be collected again in new stars and solar systems. As Carl Sagan so eloquently put it “We are all stardust.”

Dr. David Deamer is a Research Professor of Biomolecular Engineering at the University of California, Santa Cruz. Deamer received his undergraduate degree in Chemistry from Duke University in 1961, and PhD in Physiological Chemistry at the Ohio State University School of Medicine, 1965. Deamer, in collaboration with others, developed the concept of using nanopore sequencing on DNA molecules.  In a second research area, he investigates how the first living cells could have produced the membrane compartments needed for the origin of life.

Deamer is the author or co-author of 200 research papers and review articles, and the author/editor of 12 books, including Origins of Life (2010), co-edited with Jack Szostak, and First Life (2011) published by UC Press.  His research has been featured in NOVA and National Geographic programs on life’s origins and artificial life. In 2011, he led one of three winning teams in the “Origin of Life Challenge,” a major new prize that awarded significant grants to research into how life began