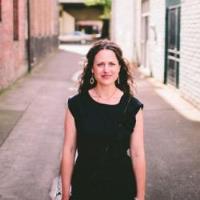 Beth Wood is a modern-day troubadour and believer in the power of song. Her exceptional musicianship, crafty songwriting, powerhouse voice, and commanding stage presence have been winning over American audiences for eighteen years. Beth’s music is soulful, organic, intelligent, barefoot, high-energy communication of joy.

Beth Wood began her musical journey in Lubbock, Texas, a high plains town with a uniquely rich musical heritage that includes Buddy Holly, Natalie and Lloyd Maines, Mac Davis, and Joe Ely to name a few. When she wasn’t dodging tornadoes and dust storms, Beth was studying classical piano, violin, harp, and voice and contemplating the greatness of her Dad’s record collection. With big dreams of becoming a musician, Beth left west Texas to study voice and piano at Brevard College in North Carolina. A detour from her classical studies led her to Austin, where she picked up a degree in literature and a guitar. Beth began writing her own songs and quickly discovered a feeling of musical freedom that she has been hooked on ever since.

Beth now calls Portland, OR home, where she has immersed herself in the northwest music community. In early 2016, Beth will release her tenth album, “Spring Tide”, recorded live and solo acoustic on the Oregon coast. 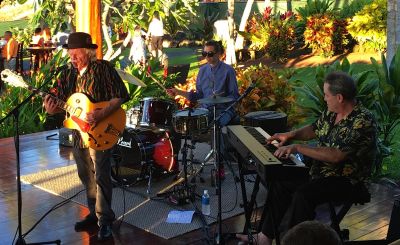 Strong Hold Trio - Andy Armer is a pianist, producer, performer and music educator. He was nominated for a Grammy award for his composition RISE in 1979 as performed by Herb Alpert. Andy lives in Bend OR and works with his team at Stronghold/Firing Room Productions creating music for television & advertising.

Richard Taelour is a guitarist and vocalist extraordinaire. He has worked with many of the biggest names in the music business. Richard was signed by super manager Shep Gordon and recorded for Arista Records. He currently works with his team at Stronghold/Firing Room Productions creating music for television and advertising.

Justin Veloso plays drums. He graduated from the New School for the Arts in New York City. Justin has recently returned to his hometown of Sisters OR after more than a decade in NYC playing music and creating art