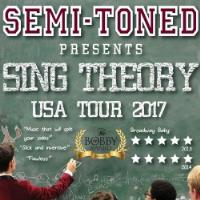 “The charm in this group lies within the fact that they don’t take themselves too seriously, and that each member brings their own quirky style to every number. This individuality is a breath of fresh air from the traditional show choir set-up, as they relate to the audience as people, not just shiny, stagey, Glee cut-outs.”  - Natasha Granger, Edinburgh Fringe

Semi-Toned are the University of Exeter’s infamous all male singing sensation. The group has been at the forefront of British a cappella for several years: winners of the Voice Festival UK, the Edinburgh Fringe Bobby award and now the champions of BBC2’s Show The Choir: Gareth’s Best in Britain. Semi-Toned also onto the front page of Buzzfeed in 2015 with their debut music video ‘Rich Man’.

This will be their third tour of the USA. Reviews from last year’s tour, Game of Tones, hailed them as an “international success” (The Viking News, Valhalla). Praised for their creativity, uniqueness and vocal acrobatics the group embraces music of a variety of genres to ensure there really is something for everyone in any of their shows.

In Semi-Toned presents: Sing Theory the group’s twelve strong ensemble take the audience on a thrilling journey from the seventies through to the present day, all via the medium of music – and completely unaccompanied. The show promises to give audiences more of what they love; the same humour, innovation and musicality that is synonymous with the boys in burgundy. And if that wasn’t compelling enough, the group is also renowned for its dancing ability: watch as they shuffle in Lindy Hop, drop to Beyoncé and do the Macarena. The show contains a little something for everyone, with landmark songs of the recent decades including Toy Story, Stevie Wonder and Kanye West…

Restless Vocal Band is opening for Semi-Toned. Hailing from Seattle, they were most recently seen on stage at the 2017 Bend A Cappella Festival, and were the champions of the 2016 Pacific Northwest Harmony Sweepstakes. These vocal powerhouse possesses the experience and versatility to entertain audiences with covers spanning decades and genres – from Bill Withers to Bruno Mars, The Temptations to Taylor Swift, and more.