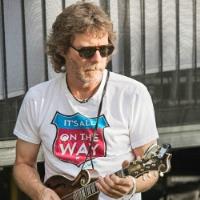 Mandolin icon and Father of Newgrass

If joy were a person, he’d bring both peace and frenzy. He’d be full of music, light, and energy that soothes even as it stirs us up. Eyes closed, wire-rim glasses in place, mandolin pressed against his ribs, joy would be Sam Bush on a stage.

“I feel fortunate that when it’s time to play, no matter how I feel physically or mentally, once the downbeat starts, my mind goes to a place that’s all music,” says Bush. “The joy of the music comes to me and overtakes me sometimes––I just become part of the music.”

Sam Bush’s new album Storyman is a freewheeling collection that gleefully picks and chooses from jazz, folk, blues, reggae, country swing, and bluegrass to create a jubilant noise only classifiable as the “Sam Bush sound.” Many of the songs are stories-several of them true-and the legendary mandolin player co-wrote every one of them with friends, including the late Guy Clark, Emmylou Harris, Jon Randall Stewart, Jeff Black, bandmate Stephen Mougin, and others. Storyman continues Bush’s tradition of creating something completely new and fresh for each recording, this time focusing on stories from some of the most popular songsmiths of our time.

For Bush, a lifetime of channeling his energy into his art has led to stylistic innovations that have changed the course of bluegrass and roots music alike. Bush has taken home three GRAMMY awards, received a Lifetime Achievement for Instrumentalist Award from the Americana Music Association, hosted the International Bluegrass Music Association Awards, and has been honored as Mandolin Player of the Year four times. In March 2010, Legislation passed in Kentucky, Bush’s home state, that officially named Bowling Green the “Birthplace of Newgrass,” and Sam Bush the “Father of Newgrass.”

Bush took about four years to record the latest installment in his legacy. “It’s still important to me that all of the songs fit together on an album,” he says. “I’m well aware that people buy individual tracks digitally, and that’s good. But I still think of it as an album-a body of work. And I’m really satisfied with these songs. It’s taken a while, but I sure am happy with them.”

Produced by Bush and recorded partially at Neptone Recording Studios in Destin, Florida, and Bush’s longtime go-to, Nashville’s Sound Emporium, Storyman is the best of friends swapping tales, and jamming for the sake of jamming. “If there is a love in it, it’s the love of playing music together,” Bush reflects. “When we play live on stage, if people can feel the joy we’re feeling, then we have succeeded. That’s the goal to me of playing music: Did the audience feel something?”

Their music may be delivered acoustic or electric and is based in the folk tradition with bluegrass and old-time at its deepest roots.  Bill is a well respected, and award winning songwriter within and beyond the Colorado circuit and Shelley is a skilled bass player and vocalist.  They’ve been making music together for well over a decade and like a fine wine or exceptional bourbon, the best of their qualities have naturally distilled into a truly unique vibe with a certain sound and feel that has developed into a trademark.

Whether it’s a sweet love song, a tribute to veterans, or a rocking boogie-woogie number, their music is always delivered in a comfortable casual way that pulls the listener in and has them hanging on every word.