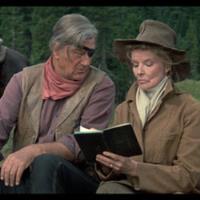 Admission is FREE, but with a twist – You can pay what you decide AFTER the film.

Two of the most popular stars in movie history are together for the first time. John Wayne reprises his Oscar-winning “True Grit” role as a rascally, eye-patched, whiskey-guzzling U.S. Marshal. Katherine Hepburn, playing a prim reverend’s daughter, joins the grizzled gunfighter to avenge the murder of her father by a band of drunken thugs. What develops is a tenderhearted relationship as unpredictable as the wild west itself.

Ever found the locales in a movie more impressive than the plot or the settings more alluring than the actors? Well, that happens regularly in films shot in picturesque Central Oregon! The Tower Theatre Foundation joins the Deschutes Historical Museum to present a different kind of film festival this July. Titled “Made in Central Oregon,” the Tower screens three examples of our region’s claim to cinematic fame.