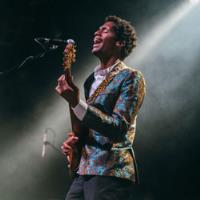 Central Oregon favorite Ron Artis II has a new album, “Purpose,” and his CD release tour starts exclusively at the Tower! Joining Hawaii’s supremely soulful and energetic performer will be Precious Byrd, one of the most sought-after funky rock ‘n' roll bands in the Pacific Northwest. We’re taking out the front rows so you don’t just have to dance in the aisles!

Precious Byrd has been voted #1 Party Band in Oregon multiple years running they have played for brands like Nike, Deschutes Brewery, Pendleton Whiskey, and more! Their fresh renditions of modern and classic hits, along with a number of high energy originals are sure to fill the dance floor and get people on their feet! Precious Byrd plays across the nation and features Grammy award winning bassist Lonnie Chapin and drummer extraordinaire Michael Summers, boasting one of the tightest rhythm sections around. Matched with the soulful high energy of front man Corey Parnell and his brother Casey Parnell on electric, the crowd gets nothing but their all! The band also features renounced saxophone player Andy Warr, known for his work on the Oprah Winfrey show. Top it all off with lead guitarist Derek Williams who has shared the stage with Florida Georgia Line and Jack Owen, and you’ve got a full band ready to rock! Precious Byrd released their own much anticipated original album “Superphonic Magical” in 2016. They draw thousands to local street festivals and events in their local area and continue to spread love and music wherever they go! Resorts continue to brag about record sales at events these boys play at.