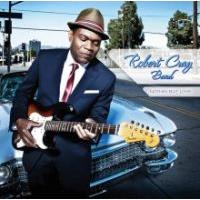 Nothin But Love is the 16th Studio album by Blues Guitarist Robert Cray. It was released on August 28, 2012, through Provogue Records. It was his first studio album since 2009's This Time.

"Blues is one of the foundations of our music, but it’s not all that we play,” Cray says. “When I first started playing guitar, I wanted to be George Harrison – that is, until I heard Jimi Hendrix. After that, I wanted to be Albert Collins and Buddy Guy and B.B. King. And then there are singers like O.V. Wright and Bobby Blue Bland. It’s all mixed up in there.”

He continues, “Every time somebody asks me about where my music comes from, I give them five or six different directions – a little rock, soul, jazz, blues, a little gospel feel. Then there are some other things that maybe fall in there every once in a while, like a little Caribbean flavor or something. You just never know. I always attribute it to the music we grew up listening to, and the radio back in the ‘60s. It’s pretty wide open. It’s hard to put a tag on it.”

Onsale NOW to Tower Theatre Members ONLY.  Not a Member?  Consider becoming one to get the best seats in the house and support your local performing arts Theater!  LEARN MORE