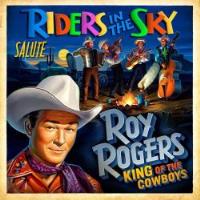 By definition, empirical data, and critical acclaim, they stand "hats & shoulders" above the rest of the purveyors of C & W - "Comedy & Western!"

Guitarist Ranger Doug, "Governor of the Great State of Rhythm," sings lead and baritone vocals with anever-present big grin and warm twinkle in his eyes. A yodeler of breathtaking technique, he is also anaward-winning Western music songwriter in his own right--and a distinguished music historian whose 2002 Vanderbilt University Press book "Singing in the Saddle" was the first comprehensive look at the singing cowboy phenomenon that swept the country in the 1930s.

Too Slim Upright "bunkhouse" bassist Too Slim, easily the sharpest wit in the West, was, prior to the Riders, ajanitor, industrial galvanizer, puppeteer, rumor-monger, hay stacker, burlesque show emcee, sportswriter, wildlife manager, and electric bassman. Besides his superb bass play and comic genius, he has inspired thousands to whack out tunes on their faces.

Woody Paul Woody Paul, "King of the Cowboy Fiddlers," sings lead and tenor vocals, and gained early experience incountry-western music by hanging out with the likes of Roy Acuff. When not dazzling Riders fans with his fiddle, he's thrilling them with intricate rope tricks which he swears he'll get right before his career is over.

Joey Accordionist Joey, the CowPolka King, "plays both ends against the middle," as they say, on his "stomach Steinway." The master musician, who apprenticed with the late polka king Frank Yankovic and has recorded with everyone from Roy Rogers to U2, is also the Riders' album producer and a licensed driver.