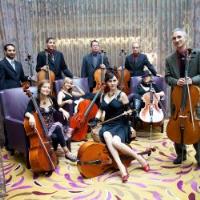 Get 10% off when you buy 5 or more events out of the Centerstage series!

Since the group's inception in late 2007, the Portland Cello Project (or, PCP, as their fans affectionately call them), has wowed audiences all over the country with extravagant performances, everywhere from Prairie Home Companion, to parties on loading docks in NYC, to symphony halls from coast to coast, to punk rock clubs.. The group has built a reputation mixing genres and blurring musical lines and perceptions wherever they go.

No two shows are alike, with a repertoire now numbering over 1,000 pieces of music both expected and unexpected to come from a cello. The Cello Project's stage setup ranges from the very simple (4-6 cellos), to the all out epic (which has included 12 cellos playing with full choirs, winds, horns, and numerous percussion players).

The Cello Project works to build bridges across musical communities through collaborations and educational outreach. They have collaborated with a diverse assortment of musicians, from high school and university music programs, to the Dandy Warhols to Garrison Keillor to Trampled by Turtles to Corin Tucker to Maya Beiser to Ben Sollee to Zoe Keating to Howe Gelb, just to name a few...