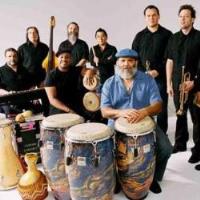 For more than three decades as both a leader and a sideman, conguero Poncho Sanchez has stirred up a fiery stew of straightahead jazz, gritty soul music, and infectious melodies and rhythms from a variety of Latin American and South American sources. His influences are numerous, but among the more prominent figures that inform his music are two of the primary architects of Latin jazz – conga drummer and composer Chano Pozo and trumpeter Dizzy Gillespie. Sanchez pays tribute to these two titans on his new album, Chano y Dizzy!, his 25th recording as a bandleader on Concord Picante, set for release on September 27, 2011. For the first time, Sanchez and Francisco Torres, long time band member (trombone/vocals), join forces to produce the new album.