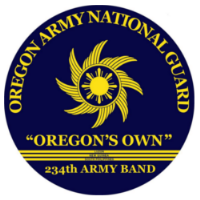 Tickets are FREE - seats are reserved

The 234 th Army Band, nicknamed “Oregon’s Own” is the Oregon National Guard’s ambassadors to the State of Oregon. Organized in 1919, the band has seen duty in the Pacific during WWII and was awarded several citations including the Philippine Presidential Unit Citation for service from October 17, 1944 to July 4, 1945. The band tours every summer as part of its Annual Training, performing concerts for the citizens of Oregon and beyond. “Oregon’s

For their Centennial Concert Tour starting June 30, 2019, “Oregon’s Own” Concert Band, called Empire Builders , will be performing a free, public concert series throughout Oregon. Chief Warrant Officer Ashley Alexander and Staff Sergeant Dave Williams will be conducting an exciting program of music, sharing the history of the band over its 100-year existence. This year’s program features music by John Williams, Julie Giroux, and Glen Miller, mixed in

with rousing marches, patriotic selections, and a tribute to all Service Members of Oregon and beyond. Featured musicians will include retired and past members of the 234 th Army Band, soloing with and conducting the current members of the band.

“Oregon’s Own” 234 th Army Band will also feature its three smaller performing groups, Brass Ops , General Dischord , and 45 Away this summer on their Centennial Concert Tour. These groups will be performing their own genres of music, entertaining audiences in various settings and telling the Army story to fellow Oregonians. Based in Clackamas, the 234 th Army Band is comprised of over 35 Soldiers from Oregon and Southwest Washington. In addition to saluting military Service Members past and present, the band aims to entertain all members of the community as a show of appreciation for the shared sacrifice families of Oregon National Guard Service Members have endured in support of military operations around the globe.

These events are free and open to the public. Public inquiries can be made to SFC Joshua Yost at 503-683-5423 or by visiting www.facebook.com/234tharmyband